I thought killing yourself while experiencing an orgasm was just an old wives' tale. You know, something your mother told your brother so that he wouldn't jack off in the bathroom.

But a woman in England, rest her soul, found out that it's true.

30-year-old Nicola Paginton was found dead inside her home last October after she missed days at work and her employer and friend broke into her home to seach for her.

According to the UK Daily Mail, Paginton was found dead, naked from the waist down with a sex toy beside her, pornographic material playing on her laptop and her cat lying on her chest.

An inquest into her death was made to a Home Office pathologist who confirmed that the cause of death was hearty arrhythmia, likely brought on by her state of arousal.

The cause of death was also confirmed by Gloucestershire coroner Alan Crickmore who told The Mail that it was likely that 'her activity before death' contributed to the fatal arrhythmia.

Scary! This story reminds us that the little footnote at the end of those sexual enhancement ads, "be sure you're healthy enough for sexual activity," is the truth. 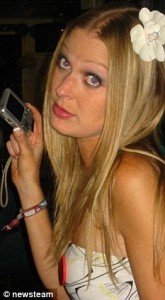