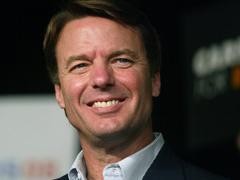 More "news" of John Edwards and Rielle Hunter's sex tape has been circulating on the Internet. The headline that grabbed my attention is the fact that the former senator has been called well endowed in the area between his thighs.

Now, I want to see it. Yeah, I said it. First of all, I'm not even shocked by the fact the Edwards has a sex tape. When you're fucking a videographer, those things happen. His political career is over so if he's got a Tommy Lee-sized penis, then let the world see it.

What's troubling about the Edwards/Hunter affair is that so many people got involved in the cover up and then about a year or so into it they found some morals. WTF? It's either morals or the size of Edwards' dick that made them go rogue, so to speak.

Somebody is just jealous that they don't have a big dick like John Edwards. But can someone please leak this video?!