Why you should never play sex games with strangers: Amanda Knox 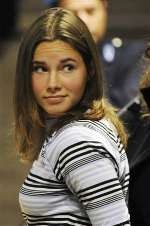 American student Amanda Knox could spend the rest of her life in an Italian jail.

If you've been following this case, you know Knox, her former boyfriend Rafael Sollecito, 26, and acquaintance Rudy Guede are facing murder charges in the death of a British student.

Is Knox a victim of wanting to do anything to please her man? Or did she get off on watching her roommate bleed to death?

According to ABCNews, the prosecutor thinks so:

Mignini said the two women had argued over rent money missing from Kercher's room. Kercher had also complained, Mignini said, of Knox's habit of bringing boys to the house late at night.

On Nov. 1, 2007, Knox showed up late at the house with her Italian boyfriend Sollecito and Guede, who had said he could get Knox drugs, the prosecutor said.

"There could have been an argument between Meredith and Amanda that then degenerated because of the rental money that had disappeared or maybe Meredith was annoyed by the mere presence of Rudy," Mignini said.

"After a heated discussion the three, under the influence of the drugs, and probably alcohol as well, decide to put into action the project they had of involving an extreme sex game," he said.

The prosecutor contended that Knox's anger went out of control.

"Amanda has the occasion to get back at that overly serious and moralizing English girl who she felt was too tied to the closed group of her English friends, and who accused her not too subtly of not being orderly or clean, and who criticized her for being too easy with boys," Mignini said.

Here's the thing -- not going to comment on Knox's guilt or innocence, cause Sally is not on the jury-- but you can't force someone to play a sex game with you. You can't help people rape the "moral" girl because you're mad at her.

"Amanda nurtured her hate for Meredith, but that night that hate could explode. For Amanda the moment had come to take revenge on that prissy girl. That is what she must have thought. And in a crescendo of threats and increasing violence, Meredith's ordeal begins."

But, this case is grabbing headlines because of the sex. And that does a disservice to the victim. What about her life and death? Had she been killed by a gunshot to the chest and Knox was accused of shooting her -- would we care?

Sex sells, even in death. Knox is standing trial for murder and the fact that she likes (or liked) sex that was outside of the normal thought process. Was she wrong for sleeping around and doing drugs?

Is that really our call? If you or I were on trial and our sex lives were paraded in public, would we get off without a scarlet mark?