Want to meet the Furverts? 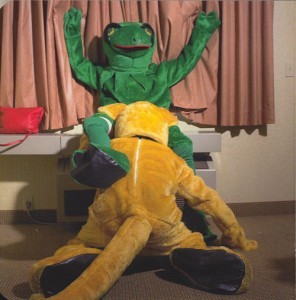 Furverts is a totally hilarious picture book showing people dressed in costumes in various sex positions. The kicker is, the animals would be enemies in real life. Like the dog hitting the cat from the back.

Michael Cogliantry, the photographer behind the book, originally came up with this project to provide a commentary on that anonymity of online communities, according to the publisher.

Furries aren't just about sex, according to many online articles. They're kind of nerdy, into science fiction and writing fan fiction.

According to an article from the Pittsburgh City Paper in 2006:

"despite their wild image from Vanity Fair, MTV and CSI, furry conventions aren't about kinky sex between weirdos gussied up in foxy costumes", that conference attendees were "not having sex more than the rest of us"

Furverts, however, isn't about changing stereotypes or setting the record straight about the lifestyle. It's a laugh--for those who get the humor. There's one picture of an elephant fucking a donkey. That's got to make you laugh.