A fitting farewell to Four Loko 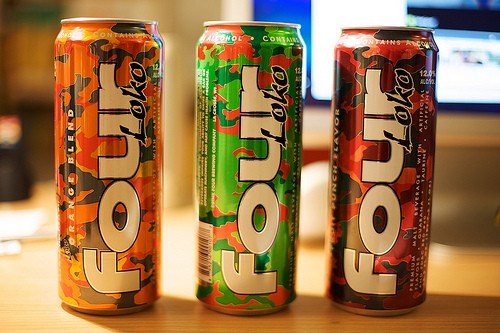 With its disappearance from North Carolina shelves imminent over the next few weeks, and everyone up in a tizzy about what it does to young folks (who happen to love it), some friends of mine decided to bid farewell to our good friend, Four Loko, one Tuesday night.

Its “ban” (which isn’t entirely accurate) made it surprisingly hard to find. After hitting a few gas stations on the way to the party that had either sold out or removed them from their shelves, I initially showed up to the house party Four Loko-less. Party foul. So when someone else arrived with three, I hit the “Murder Mart” on Plaza and Parkwood and got my hands on my favorite flavor, Cranberry Lemonade.

The night’s conversation was weirdly somber. Like discussing the qualities we’d miss most about a friend who’d moved or passed away, we debated our favorite flavors to the general consensus that Orange and Grape are terrible, Cranberry Lemonade and Watermelon are the jam.

Briefly interrupting the reminiscing was a guy in a minivan who pulled up to the house, trying to sell ribs out of his cooler. While most people ignored him, one friend went in for a closer look. To watch his drunk ass investigate the product, then try and negotiate a price for this loose and random meat, before realizing he didn’t get paid for a few more days, was priceless.

Almost like going through the stages of grief, about a half a can (a can and a half for others) later, the “good times” clicked in everyone’s head, and we started celebrating the life of the “Black Out in a Can.”

Shenanigans, which to that point had been minimal, were soon replaced by outright dumb shit. The music got louder. Some people started wrestling. Some people sang and danced along to YouTube videos (what you know about “Movin’ Like Berney”? Look it up if you’re unfamiliar). Others just sort of stumbled and sat quietly, clearly in their own zone.

Unlike the college days of Quattro Crazy, people here could actually handle their alcohol. Blackouts were all but nonexistent, but the familiar, good times were soundly intact.

Godspeed, old friend. We’ll miss you — or just suck it up and cross the border, because all the cool and dangerous stuff, like fireworks and Four Loko, are legal in South Carolina.