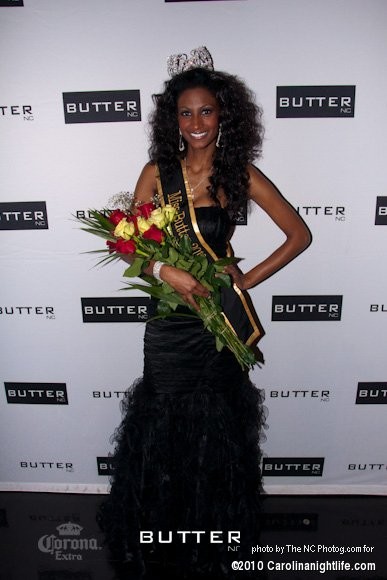 Courtnee Mason left the Miss Butter competition with a smile, a crown and a new title on Nov. 5. Ten contestants competed for the title of Miss Butter at the N.C. Music Factory hot spot, but only one winner was crowned.

Mason is a model/actress from Gastonia, N.C. Aside from countless appearances on television shows, runway shows and print ads, Mason was named as one of Charlotte Style Mag’s “Charlotte’s 25 most stylish” as well as being 2nd runner up for the title of Miss Black NC USA 2009.

The competition included a panel of five judges including Brotha Fred, former Miss NC USA, Scott Cooper from Evolution Talent Agency, among others. The ladies strut their stuff in both a swimsuit and in evening-wear for the panel and audience. Prior to the competition, the competitors were explained the duties and responsibilities of representing the nightclub. Although the ladies did not answer questions on the night of the competition, they did have an interview with a panel of three judges (current and past N.C. queens) earlier in the week.

Mason says that she feels "so honored to represent one of the nicest upscale night spots in Charlotte.” As far as responsibilities go, Mason said that she is “excited to have a hand in helping with the Ronald McDonald House which is opening in Charlotte in March 2011.”