Sculptor James Clark in it for the long haul

This past Friday night, Center of the Earth gallery combined a birthday party and some front-porch-style shooting the breeze with a body of work inspired by the sweep of art history, random news snippets and chance encounters.

This was opening night for A Sculptor’s Life, a 40+ year retrospective of work by 87-year-old artist — and birthday honoree — James Clark, who makes Cubist-inflected wood constructions that are both muscular and sensuous. 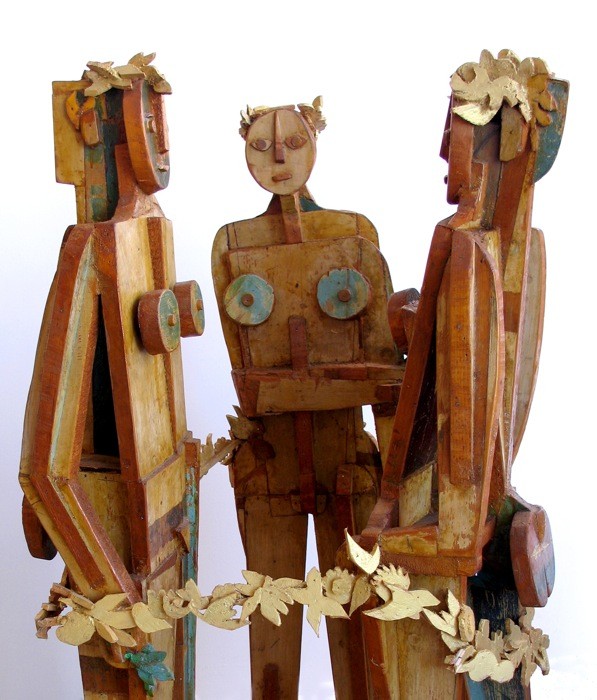 A conventional interview with Clark is a challenge, but you can pull up a chair and take notes while he engages in a charming monologue about his methods and the things large and small that inspire him. Born in New York City, Clark received a BFA from Rhode Island School of Design and an MFA from the Cranbrook Academy of Art. His early work referenced nature, but he was eventually pulled into the then-dominant mode of abstraction. But then “Pollock came along, and I realized all had been said, so I went back to the figure ... I wasn’t exactly making the figure, but I was making natural forms. There was really no point in continuing with abstraction.”

Emotion is thick in this work. Many pieces have innocuous titles, which only heighten the sense of unease. At “Burger King” (1985) depicts what at first looks like a couple standing at a table in a cocktail lounge, but Clark says that it was inspired by the server at a Burger King near his home in Pennsylvania who seemed unaware of her odd, suggestive posture. “Girl Trying on a Beret” (1994) pairs an ordinary gesture with a facial expression that could be interpreted as alarm or resignation.

Many of these constructions have abraded, pitted surfaces and a thick, waxy finish. Some of the wood looks salvaged. But, Clark explains that if something isn’t working, he tears the piece apart to determine what went wrong, then rebuilds it or uses the wood in another work, thus accounting in part for these alluring surfaces. (And speaking of alluring surfaces, make sure you get a 360-degree view of Clark’s figures, because most of them sport fine little posteriors.)

Everyday grief is a thread running through much of Clark’s work; for example, “Broken Heads” was inspired by a Philadelphia Inquirer article about innocent bystanders killed in the inner city in a single year.

Clark lived and worked in New York and Pennsylvania before moving to North Carolina to be closer to family. After several years in Raleigh, he moved to Charlotte two years ago. Despite his brief tenure here, Clark is something of an icon in NoDa. He works in his studio most every day, but when he’s not there you can often find him on his front porch near the Smelly Cat Coffeehouse or walking his dog Milou in the neighborhood.

James Clark: A Sculptor’s Life runs through May 29.

The Vol. 5 of the Pecha Kucha series, which Point 8 Forum organizes, will be this Thursday (April 8) at 7:30 at the Dharma Lounge. The event will feature 10 presentations on a variety of topics ranging from ecology to Brazilian wrestling, as well as music and dance performances. More details @ www.point8.org/pechakucha.